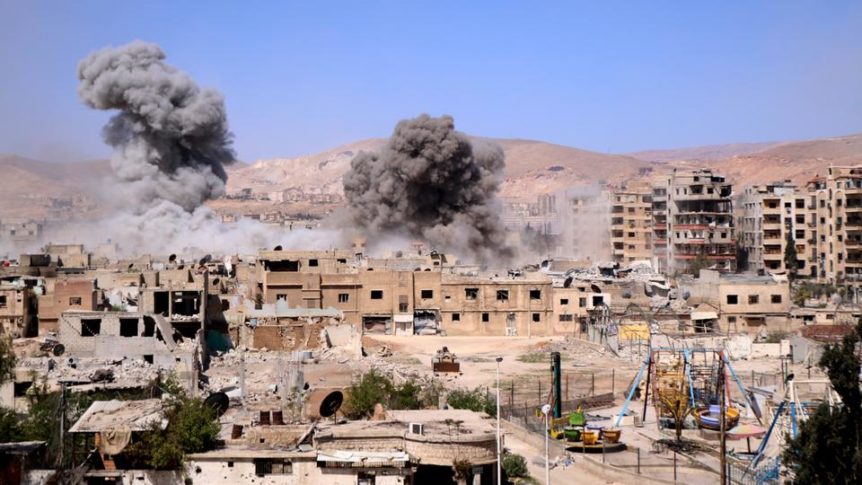 The Developmental Interaction Network (DIN) worked on analyzing the data gathered by the “Insan Center for the monitoring of violations of Human Rights in Syria” (also a member of the network). DIN analyzed the figures relating to the air strikes and their distribution among military and civilian targets as well as the losses (human, economic, and environmental) generated by these attacks. The figures were collected in 10 different regions for the months of July, August and September 2014. The outcome of the study shows that the higher percentage of these strikes (and mainly the ones constituting of barrel bombs, explosive containers and barometric bombs) occurred in populated areas and/or in front line areas. This led to the killing and wounding of a considerable number of civilians in residential areas, as well as public places such as bakeries and hospitals.

Syria is known to be at war with Israel since 1948 and has undergone two major wars against this country in 1967 and 1973. The government claims that it is prepared to stop any eventual Israeli attack. What is striking however is the lack of shelter designed to protect the civilians. This is one of the reasons why there is such a big number of civilian casualties.

We would like to thank the people working in ground monitoring and data entry for, without them, this work would not have been possible.

“Insan Center for the monitoring of violations of Human Rights in Syria” issued statements (during the months of July, August and September 2014) which prove the perpetration of war crimes by the Assad regime, the sole owner of military aviation. A quick look at the following statements leaves no doubt as to the perpetration of these crimes.

B/ The targeted areas

It is worth noting that an attack can constitute of several air raids. Also the percentage of front line areas attacked was higher than the purely military areas.

D/ The types of weapons used and International Humanitarian Law

E/ The International Humanitarian Law: protection of civilians in times of war

The International Law, the International Humanitarian Law, as well as the international human rights law confirm the primordiality of protecting the civilians in times of war, and prohibit their deliberate targeting. The statements which were gathered from the field and analyzed, show that, during the period under review, inhabited civilian areas, infrastructure as well as other protected categories (hospitals, holy places, schools, bakeries and civilian provisioning warehouses) have been targeted in most of Syria. The regime, through its continuous shelling of a wide geographical territory containing civilians, shows its indifference and its systematic excessive use of force. It also manifests the intentional killing of civilians in areas controlled by the opposition, as collective punishment. The statements reveal that the majority of the air raids on these areas had no apparent reasons, apart from a few cases where the opposition had attacked first. This proves the existence of cases of war crimes and crimes against humanity. While the government is responsible for the majority of these crimes, the use by the armed opposition of residential areas to build their military bases from which they launch attacks also amounts to war crimes.

The situation in Syria amounts to a non-international armed conflict. According to the international definition, non-international armed conflicts are “protracted armed confrontations occurring between governmental armed forces and the forces of one or more armed groups, or between such groups arising on the territory of a State [party to the Geneva Conventions]. The armed confrontation must reach a minimum level of intensity and the parties involved in the conflict must show a minimum of organisation.”[4]Since the war in Syria falls under this category, a strict set of laws contained in the article 3, common to the 4 Geneva conventions, as well as the second additional protocol, apply to the situation.

Article 3, common to all four Geneva Conventions of 1949, defines, in its first paragraph civilians as being “persons taking no active part in the hostilities, including members of armed forces who have laid down their arms and those placed ‘ hors de combat ‘ by sickness, wounds, detention, or any other cause”. [5]

In its articles 35.2 and 48, respectively, the protocol declares:

“It is prohibited to employ weapons, projectiles and material and methods of warfare of a nature to cause superfluous injury or unnecessary suffering.”

The data gathered and analyzed in this paper reveals that the civilians are directly targeted by aerial raids. Targeting civilians is used as a collective punishment, aiming at killing and displacing civilians, which amounts to crimes against humanity. The non respect of the law of war in itself amounts to a war crime.

The number of civilian casualties, the number of housing targeted (far from fighting zones and front line areas) as well as the amount of barrel bombs, explosive containers, barometric bombs and cluster bombs, all prove a systematization in killing which amounts to genocide.

The systematical use of traditional weapons, prohibited under international law in general, and against civilians in particular, leads to the conclusion, that the government is seeking to kill the highest number possible of civilians as well as destroying residential areas and displacing its population, which also can amount to crimes of genocide.

In counterpart, the military opposition is also committing war crimes through the building of some of its military bases in residential areas and/or starting attacks from them.

The parties at war should:

The International Community should:

Photo: Smokes rise after Assad regime and its allies carry out air strikes in eastern Ghouta’s Douma town in Damascus, Syria on April 07, 2018.

We use cookies on our website to give you the most relevant experience by remembering your preferences and repeat visits. By clicking “Accept All”, you consent to the use of ALL the cookies. However, you may visit "Cookie Settings" to provide a controlled consent.
Cookie SettingsAccept All
Manage consent

This website uses cookies to improve your experience while you navigate through the website. Out of these, the cookies that are categorized as necessary are stored on your browser as they are essential for the working of basic functionalities of the website. We also use third-party cookies that help us analyze and understand how you use this website. These cookies will be stored in your browser only with your consent. You also have the option to opt-out of these cookies. But opting out of some of these cookies may affect your browsing experience.
Necessary Always Enabled
Necessary cookies are absolutely essential for the website to function properly. These cookies ensure basic functionalities and security features of the website, anonymously.
Functional
Functional cookies help to perform certain functionalities like sharing the content of the website on social media platforms, collect feedbacks, and other third-party features.
Performance
Performance cookies are used to understand and analyze the key performance indexes of the website which helps in delivering a better user experience for the visitors.
Analytics
Analytical cookies are used to understand how visitors interact with the website. These cookies help provide information on metrics the number of visitors, bounce rate, traffic source, etc.
Advertisement
Advertisement cookies are used to provide visitors with relevant ads and marketing campaigns. These cookies track visitors across websites and collect information to provide customized ads.
Others
Other uncategorized cookies are those that are being analyzed and have not been classified into a category as yet.
SAVE & ACCEPT