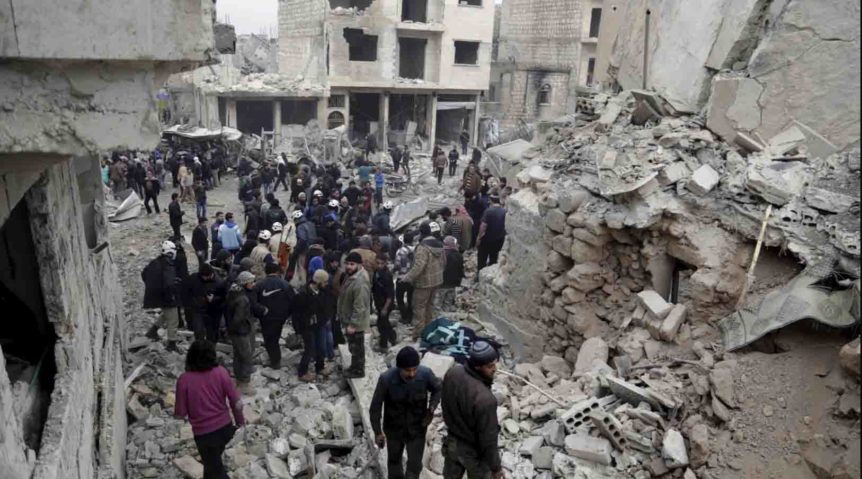 The data collected by the Development Interaction Network, through its “Insan Center for monitoring and control of human rights violations” during the months of July, August and September 2014, shows that throughout the Syrian territory, the majority of military conflict took place in populated areas and/or along contact lines.

This led to a large number of casualties and injuries among civilians; both at the contact lines, and in relatively further away areas that are exposed to shelling by both sides of the conflict.

During the aforementioned three-month period, 425 clashes were reported. The death toll among non-participants in the military clashes rose to 79 casualties, all certified and documented cases by name. This is a clear violation of Article 3, paragraph a, of the First and Fourth Geneva Conventions and Article 4, paragraph (angel) of the Additional Protocol II to the Geneva Conventions.

Both sides of the conflict committed crimes against humanity by launching attacks with the prior knowledge that they would cause civilian casualties and injuries (see Rome Statute, Article 8: War crimes, paragraph (a-1), paragraph (b-4 and 5)).

Through monitoring military clashes, reporters observed that these clashes usually begin in populated areas and then they spread, causing the destruction of property, displacement and forced deportation of residents of the neighborhoods where clashes take place.

Clashes are temporary but repeated, which leads to a deterioration of living conditions. The conflicting parties also use civilian buildings for military purposes, whereby they confiscate premises and place them under their control. In other words, civilian neighborhoods are taken hostage by the military fighters. Even though military clashes take place within civilian areas, no measures are taken to protect the civilians there, such as implementing an evacuation plan, or the setup of alternative shelters or safe corridors. The fighters, at best, send the inhabitants warning or intimidating messages to evacuate their homes.

These practices are flagrant and repeated violations of the rights of forcibly displaced civilians and can even qualify as war crimes, according to Article 8, paragraph a-4 of the Rome Statute, (causing widespread property destruction and seizure without justified military necessity and in violation of the law and in a frivolous manner).

It was observed that 37.3% of the total clashes that were monitored took place in densely populated areas and 33.5% at the frontlines (which usually overlap with residential districts); whereas only 16.4% of the clashes took place in military zones and the remaining 12.5% in unpopulated areas.

These data indicate that the different conflicting parties in Syria (namely: the regime and its supporting militias, the armed opposition and its affiliated armed groups and the Islamists represented by ISIS); used civilians, both directly and indirectly, as human shields in zones of direct clashes; or as targets for intended casualties in areas exposed to airstrikes, missile attacks or artillery shelling.

According to the collected data, civilians represented 19% of injured cases and 10% of casualties.

It is worth noting that those clashes rarely resulted in significant military progress on the ground. Most of the control in the field remained the same, which meant no end to the fighting and therefore no salvation for the civilians from being targeted of the continuous fighting, missiles and rockets.

Military clashes between the main sides of the conflict (the regime and its supporting militias, the armed opposition and its affiliated armed groups and the Islamists represented by ISIS) can also be monitored in terms of which side actually initiated the fighting. Figures show the following percentages:

The clashes initiated by ISIS targeted different opponents, as follows:

To the fighting parties:

To the civil society:

To the international community: